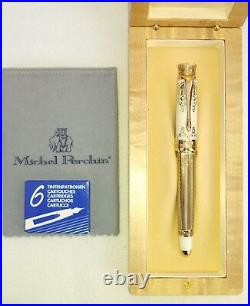 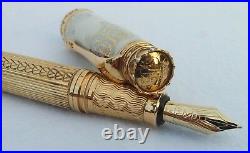 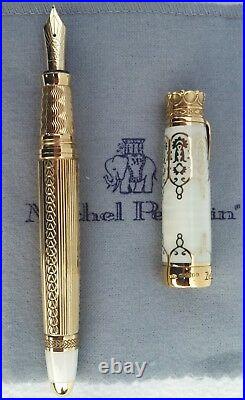 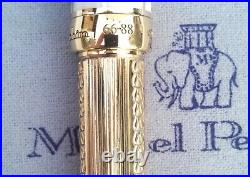 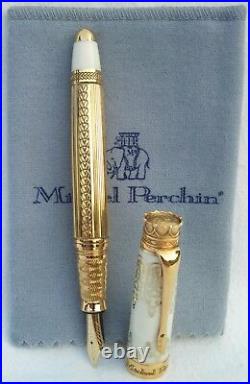 Hello ladies & gentlemen and thank you for exploring my listing for an extraordinary and attractive, extremely limited edition, and absolutely Brand New, museum quality fountain pen. Anniversary of Michel Perchin, Inc. The MICHEL PERCHIN IMPERIAL FOUNTAIN PENS were produced in 5 color combinations as follows. Total edition size = 329 pieces. If you are new to the Perchin story, allow me a moment for this abbreviated version. The first Fabergé Easter Egg was made in 1885 by Michel Perchin, (Mikhail Perikhin). In 1886, at the age of 26, this skilled craftsman, a self-taught goldsmith from a peasant background in the town of. Became chief foreman of the Fabergé firm. Until his death in 1903, his initials were put on all surprise eggs of the firm made for Emperors Alexander III and Nicholas II. The first egg made by Perchin, (Perikhin), con­sisted of an ivory shell with stripes of dark blue enamel; in the shell there was a golden-with-enamel hen with ruby eyes. Inside the hen, there was a golden crown inlaid with pearl. And inside the crown there was a golden ring. It was precisely in 1885 that the tradition of annually giving Fabergé Easter eggs was born. Subsequently, Michel Perchin, Inc. Borrowed from the designs of the original Faberge Eggs to create a unique line of extremely limited edition writing instruments. We were an AUTHORIZED DEALER of Michel Perchin pens when the company was still manufacturing fountain pens. (EDT) Monday through Saturday and. Influenced by the extraordinary designs of the Russian Imperial Palace, this fountain pen from Michel Perchin, Inc. Features multiple patterns of engraving, guilloche, and flawlessly balanced by the design work on the barrel and cap. The pen is bored from a rod of solid sterling. 925 English hallmark silver. The cap and barrel ends are hard enameled and fired. The pen is then highly polished to a brilliant luster and re-fired for a lasting finish. The barrel, cap, clip, crown, ring and high relief guilloche on the pen is then layered (plated) in. The pen has a medium nib which is. Alloyed with iridium for strength and flexibility. Additionally, the pen features the special 10. Anniversary Michel Perchin nib not to be available on any other pen. The feeder is ebonite. The pen is seated in a beautiful, Swiss made, maple wood box and ships in an outer sleeve dust cover. Up for sale here is the #66/88 serial number in. This fine fountain pen is NEW old stock, meaning that we were the original retailer and this pen has never been owned by another client. We archived a number of Perchin Pens for future sale and we are now releasing this item for sale. If in doubt, please ASK FIRST! WE WANT TO PROVIDE TOP-NOTCH SERVICE TO OUR CUSTOMERS! The item “Michel Perchin IMPERIAL Fountain Pen White Enamel Gold #66/88 Rare Hard to Find” is in sale since Tuesday, May 15, 2018. This item is in the category “Collectibles\Pens & Writing Instruments\Pens\Fountain Pens\Other Fountain Pens”. The seller is “whitemountaintrading” and is located in Bentonville, Arkansas. This item can be shipped worldwide.